Click here or on above graphic for a larger image.   Click here to read page 2 of this article

Troy in the News – Legal Action Results in Removal of D.A. from Entire Court 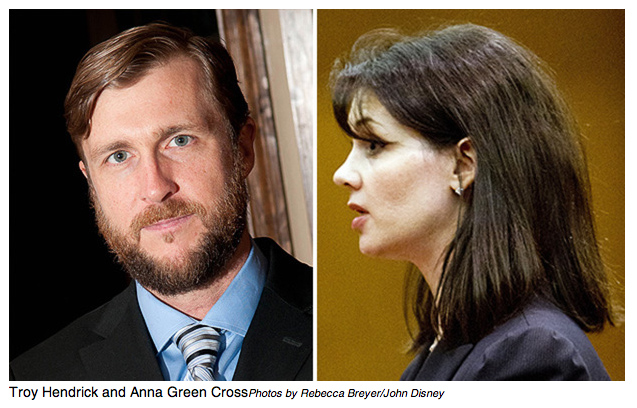 The announcement came during a hearing Thursday and in a response brief filed Wednesday by the district attorney in a lawsuit challenging his legal authority to argue cases—mostly routine traffic violations—in Recorders Court.

Chief Assistant District Attorney Anna Green Cross told Superior Court Judge Courtney Johnson that her office’s decision to withdraw was made “without consideration” of the legal challenge. But Cross did not give a reason why prosecutors with the DA’s office will leave Recorders Court.

In June, a lawyer for a man accused of speeding began arguing that neither the state Constitution nor statutes granted the DA authority to prosecute misdemeanor offenses in Recorders Court. His challenge is the first since the DeKalb County Board of Commissioners issued a resolution in September 2012 handing the responsibility to the district attorney’s office.

“I noticed what I believed to be unfair sentences handed down there. I thought it might be a byproduct of prosecutors who are normally trained to handle felonies and ask for serious time for serious crimes,” said solo criminal defense lawyer Troy Hendrick. “The Stone Mountain [Circuit] DA’s office does a fine job prosecuting seriously evil crimes in superior court. But there is probably a disconnect when the heavy-handedness of sentences for those types of crimes are applied to simple traffic offenses.”

Hendrick’s client, Kevin Lynch, has pleaded not guilty to a charge that he drove 85 mph in a 55-mph zone. Lynch’s underlying criminal case was transferred to Decatur Municipal Court after all Recorders Court judges recused this summer following Hendrick’s motion to bar prosecution. Meanwhile, the motions by Lynch’s lawyer seeking declaratory judgment and mandamus were transferred to DeKalb Superior Court, where Thursday’s hearing took place.

District Attorney Robert James began assigning prosecutors to Recorders Court in 2010 when he was county solicitor at the request of Recorders Court Chief Judge Nelly Withers. He continued the practice after he won the DA’s race and took office in January 2011. Prior to 2010, law enforcement officers presented charges and Recorders Court judges served as judge and prosecutor.

But Hendrick argued in court that the county commission’s resolution is not legal because it is superseded by state laws and constitution, which outline power granted to various offices. Rather than the DA, it is the county solicitor who has the ability to prosecute cases in Recorders Court, he said.

“We are exploring a transition plan that would enable us to prosecute cases in Recorders Court,” DeKalb Solicitor-General Sherry Boston’s spokeswoman Terrie Clark said after the hearing Thursday. “We don’t have a timeline or date yet.”

Also during Thursday’s hearing, Cross argued that Hendrick’s requests for declaratory judgment and mandamus should be dismissed because he did not properly notify the state attorney general of his constitutional challenge and because his arguments are moot, given that the DA’s office no longer will prosecute in Recorders Court after Dec. 1.

“We can prove the district attorney’s office supersedes the scope of its power without any statutory provision being challenged,” he said.

Hendrick also responded that the case is not moot because the district attorney’s office has not yet withdrawn.

“DeKalb County struggles with governmental lawfulness,” Hendrick said. “This exercise of authority is beyond the scope of what the law allows and that has to stop at some point in order to stop the reputation of this county.”

He added that unless DeKalb County Superior Court enjoins the DA’s office “there is no reason they couldn’t come back next summer or fall. The court needs to settle the misunderstanding of law by the other two branches of government.”

Johnson appeared to agree with Hendrick.

“If someone actually believes this commission has the authority to usurp state statute … I see no reason to think it becomes moot on Dec. 1,” she said.

Johnson also said the case could have “very far-reaching consequences.”

“If I find the DA’s office does not have the authority to prosecute cases in Recorders Court, does that not have an impact on all the convictions there since 2012?”

Johnson said she expects to issue an order next week. 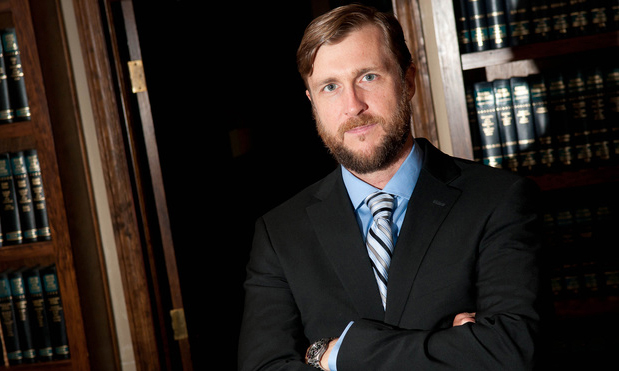 Troy Hendrick filed a motion asking that DA be barred from prosecutions in recorders court.
Photo by Rebecca Breyer

Defense attorney Troy Hendrick, whose client Kevin Lynch was charged with going 85 mph in a 55-mph speed zone, filed a motion in DeKalb Recorders Court asking the judge to bar the DeKalb DA’s office from further prosecutions there. Legislators gave the authority to the solicitor general’s office, Hendrick said in his motion. The state constitution does not empower district attorneys to prosecute traffic offenses in county court, the motion says.

“We are aware of the filed motion and will enter our official response in the coming days,” said DeKalb DA spokesman Erik Burton.

Traffic defense attorneys have complained that assistant district attorneys are recommending harsher sentences than necessary, such as jail time for speeding, since they moved into the court.

Withers said she welcomed the relief. Prior to 2010, recorders court judges served as judge and prosecutor, she said. Withers approached James in 2010, when he served as DeKalb solicitor general, to ask that he prosecute cases in her court, and he agreed to do it, she said. He took the duties with him when he won the district attorney’s race that year.

DeKalb Solicitor General Sherry Boston said her office has the authority to prosecute in recorders court.

“I did not authorize any other office to prosecute misdemeanor cases on behalf of the state of Georgia,” she said in a written statement. “I cannot comment on the facts or possible outcome of this pending motion. While I understand this motion raises issues pertaining to the DA’s role in recorders court, I can only speak to the authority of my office. O.C.G.A. § 15-18-66(b)(3) expressly empowers a solicitor general’s office to prosecute in recorders court when authorized by local governing authority. I am confident that the issues presented in this motion will be adequately handled by the appropriate courts at the appropriate time.”

Hendrick asked the Prosecuting Attorneys’ Council of Georgia for records it had on the DeKalb DA serving as the prosecuting attorney in recorders court, according to an email obtained by the Daily Report. In the email to Hendrick, Chuck Olson, general counsel for the agency, responded that there were 17 emails on the topic between his office and James. However, they are exempt from the Open Records Act because the council is part of the judicial branch, Olson said in the email to Hendrick.

DeKalb County Recorders Court is not recognized as a municipal court under one section of Georgia law, Olson’s email said, a position apparently at odds with that taken by Withers.

When asked by the Daily Report to say whether the DA can prosecute in the DeKalb recorders court, Olson said in an email that he is “legally and ethically” prohibited from giving what he considers to be a legal opinion. He also said the council does not comment on pending litigation.

Hendrick objected to Withers’ characterization of his motion.

“I find it highly irregular for the chief judge of the court in which this motion is pending, but has not yet been heard, to make comments regarding its efficacy in the court of public opinion before any evidence has been taken on the matter,” Hendrick said. “It is a disconcerting to say the least, and I am now forced to consider a motion to ask the judges to recuse themselves in this matter.”